We adopted her during a shelter adoption fair at a local Petsmart in March 2015. At the time they told us she was about a year old, but I’m not convinced she was fully a year old though she wouldn’t have been all THAT much younger. She chose my husband.

When we first went to the shelter fair we were mainly looking for a young kitten. Our Siamese, Kiva, had a bad experience with a recent foster we had for awhile and had become very gunshy with other adult cats (aside from the two senior sweeties we had at the time). She was an exuberantly energetic youngun’ and while she was very bonded with our other two, they were in their teens and we were hoping to find a young cat she could play with.

It was early on before kitten season was really starting in earnest and they didn’t have any young kittens. They had a handful of young adult cats, the youngest of which was this cute black and white cat with the “cap and cape” pattern and big green eyes. We asked to see her and Buddy held her for a few minutes, talking to her and petting her. She in turn was HIGHLY interested in him. But, alas, she wasn’t a kitten – she was about a year old. So he said he wanted to wait a few months and see about a baby kitten. We put her back in the cage, thanked the attendant, and started to leave. 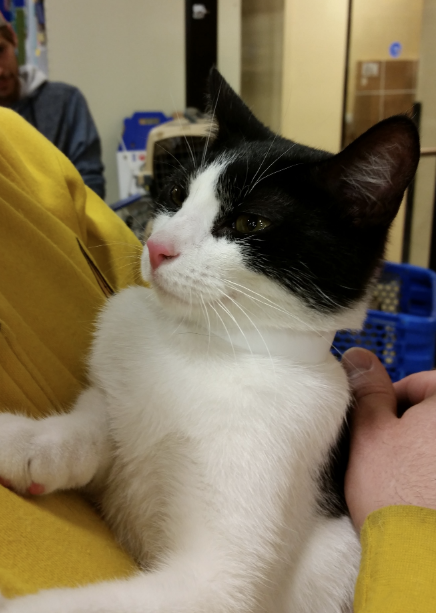 I’m serious. She cried. She wailed. She howled. She fussed. She had decided who her new Daddy was going to be, and here he was walking away without her. I think we got maybe 20 steps away. We stopped and looked at each other for a long moment, and I said “I think you’ve been chosen”. Sure enough, when we went back to see her again, they put her in his arms and she settled back down and smiled. Of course she came home with us.

The attendant remarked at the time that she was surprised the cat was being so mellow. We discovered later that she absolutely hates being held and will wiggle and complain like mad if you try. But at that moment, she was perfectly happy to be held because she was adopting two humans and she wanted to make sure we felt safe with her, I’m sure. Her shelter name was Polly. I asked Buddy on the way home if he wanted to name her, and he decided he wanted to keep her shelter name. It fit her.

And what a little pixie of a cat she is. She settled in quickly and bonded with our two senior babies. And because the cosmos has a sense of humor, she and Kiva hated one another on sight. They did eventually reach a sort of detente but they never really warmed up to one another.

Still, she was friendly and sweet (as long as you’re human or Cairo). It took her a little while to really feel “safe” – the first time I took her to the vet for her introduction checkup a few days after we got her, she threw herself in the bottom of the carrier and whimpered the entire way. It was a good couple of years before she stopped being afraid she’d be bounced around again. She mostly stayed downstairs – she’d been in our household for about 4 years before she’d even come upstairs, and it was another year before she would come into our bedroom. I think Kiva was just such a jerk to her that she didn’t think she was “allowed” to.

She loves to talk, and she rarely says “meow”. She meeps. She chirps. She occasionally says “Hello?” or “Uh-oh” but mostly, she meeps. She also sings to her toys while carrying them around the house. My all time favorite picture of her looks like she’s laughing at us. She probably was.

She chews cords. It has made both of us crazy. I’ve gone through I don’t know how many phone charging cords, headphones, tablet cables, you name it – if it’s small and thin and connects to a device, Polly wants to chew it.

She’s a phlegmatic little cat. When we got a Litter-Robot she was the first one to use it. She takes most things in stride for the most part; she’s calm and thoughtful. We have to be careful about closets – she loves to dart into them and if you don’t notice and shut her in, she doesn’t cry. She’s spent the entire night in the closet more than once because she doesn’t fuss about it.

She was heartbroken when our senior boy Zachary passed; she’d bonded with him in particular and after he died she would wander around at night crying disconsolately. When we got Cairo, they bonded right away and remain the best of buddies to this day (Well, behind Buddy. Daddy is her favorite thing in the entire world).

My favorite story about her: We’re old farts; accordingly we usually eat dinner in front of the TV watching “our show”, whatever that is this week. She likes to come sit with us and will ensconce herself next to me on the couch. One night as we were watching, there was some sort of dramatic moment on the TV. I don’t even recall offhand what, the appearance of the villain on the screen or something. In that moment of dramatic pause, Polly meeped “Uh-oh!”. She has a great sense of dramatic timing.

The reason I am telling you so much about her is she is very sick. She has cancer, of a kind we can’t really treat aside from the palliative care we’re giving her so she is comfortable. And I want you to know she was here. That she existed. That she was funny, and cute, and loved, and that she will be so incredibly missed. Adopting a pet is a heartache in the making; they don’t live anywhere near long enough. And yet, we’d do it all over again because they are so worth it.

I’ll never understand people who abandon sick or senior pets. I can’t even wrap my head around it. I’ve had 7 years now with Polly and it’s not long enough. I would give my left arm if it took away this cancer from her so we could keep her longer. We only have a couple of months and I want every single solitary moment of that.

She’s our Forever Polly, and we will be there with her til the last moment.

Joanne Kline, née Winfield was born in Long Beach, California and currently resides in North Carolina after a detour through Connecticut. Her interests include (but are not limited to) cooking, genealogy, cats, heraldry, art, books, history, and creative swearing.
View all posts by Joanne

Other places I shitpost
Secured By miniOrange